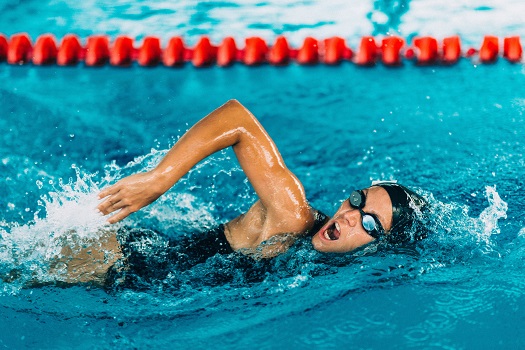 Humans have been enjoying the act of swimming for many centuries, which in itself isn’t weird. In fact, swimming has many well-documented physical and mental health benefits for people of all ages, whether it’s done in a lake, an ocean, or an ozone swimming pool in a backyard. But there are some swimming-related facts that definitely fall into the weird category, which only adds to its appeal. Here are ten weird swimming facts to enjoy or pass along.

1. Some Free Divers Can Hold Their Breath for 10 Minutes

Free diving is a type of diving done without using a breathing apparatus. Properly trained free divers are often able to hold their breath for as long as 10 minutes at a time. The world record is 22 minutes.

Regular swimmers often have excellent foot and ankle flexion capabilities. In fact, some well-conditioned swimmers are able to effortlessly point their toes all the way down to the ground with their legs outstretched when exercising or stretching on dry land.

If your goal is to swim in the Olympics, you’ve got some really tough odds to beat. Of the more than 1,800 swimmers who typically make the Olympic trials, only about 50 make the final cut for the Olympic swim team.

Each season, the average high school swimmer swims roughly a million strokes. While it’s good to be well conditioned, even younger swimmers are susceptible to shoulder and neck injuries if they don’t pay attention to proper form.

5. The Breaststroke Is the Oldest Swimming Stroke

Research suggests swimming dates back to the first century B.C. It’s believed the oldest human swimming stroke that’s probably been used since around this time is the breaststroke, which is still one of the first strokes most swimmers learn.

6. Roughly Half of All Americans Can’t Swim

According to a Red Cross survey, roughly half of all Americans aren’t able to swim. While nearly everyone can learn to swim in some way, men are slightly more likely than women to know the five core swimming skills, which are:

Some swimmers shave to look good in their preferred swimming attire, while others do it to minimize drag. However, shaving also increases skin sensitivity in a way that allows some swimmers to hone their technique by becoming more in tune with how water flows over the body.

9. Almost Every Muscle in the Body Is Used When Swimming

You might be tempted to dismiss swimming as being mostly recreational, but it’s a form of exercise that stimulates nearly every muscle in the human body. This can be especially beneficial for older adults who want to work core muscle groups in a more relaxing way.

10. Swimmers Sweat Just as Much as Athletes Do on Land

Because swimming is done in water, it’s easy to assume swimmers simply don’t sweat. However, swimmers actually lose about as much moisture through the process of sweating as people who exercise on land do.

If you’re ready to enjoy the many physical and mental benefits of swimming, installing your own pool can be exactly what you need. As an award-winning swimming pool builder San Diego families and businesses have trusted for more than four decades, San Diego Pools can create a custom pool for you that offers a great way to exercise as well as a place to relax and get away from it all. Give us a call today at 888-707-7786.